An initial stress field due to gravitational and tectonic forces exists through the depth of the soil. It is assumed that this stress varies linearly with depth and that the ratio between the horizontal and vertical stress components is 0.5. The self weight of the clay is 20.0 kN/m3 The excavation of the tunnel material is accomplished by applying the forces that are required to maintain equilibrium with the initial stress state in the surrounding material as loads on the perimeter of the tunnel. These loads are then reduced to zero to simulate the excavation

The liner is installed after 40% relaxation of the loads. Further deformation continues to occur as the face of the excavation advances. This ongoing deformation loads the liner 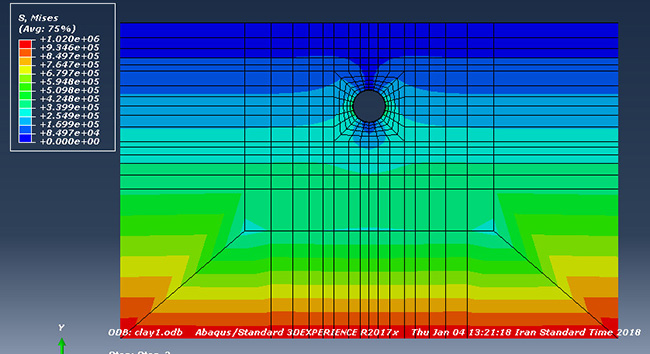 The excavation and installation of the liner is modeled in four analysis steps In the first step the initial stress state is applied and the liner elements are removed using the MODEL CHANGE, REMOVE option. Concentrated loads that are in equilibrium with the initial stress field are applied on the perimeter of the tunnel. These forces were obtained from an independent analysis where the displacements on the tunnel perimeter were constrained. The reaction forces at the constrained nodes are the loads applied here The second step begins the tunnel excavation by reducing the concentrated loads on the tunnel surface. The loads are reduced by 40% in this step before the liner is installed in the third step using the MODEL CHANGE, ADD option. No deformation takes place in the soil or liner during the third step In the fourth step the surface load is applied, and the excavation is completed by removing the remainder of the load on the tunnel perimeter Axial stress along liner inside and outside